Arunava Sen is Professor at the Indian Statistical Institute (ISI), Delhi for more than 30 years. His research interests are Game Theory, Social Choice Theory, Mechanism Design, and Voting and Auctions. He completed his Ph.D in Economics from Princeton University, his M.Phil (Economics) from Oxford University, his M.A from the Delhi School of Economics and his B.A. from St.Stephen’s College, University of Delhi. He is a Fellow of the Econometric Society and an Economic Theory Fellow. He was awarded the Mahalanobis Memorial Medal of the Indian Econometric Society in 2000 for his contribution to Economics. He is also a recipient of the 2012 Infosys Prize in the Social Sciences category for his work on “game-theoretic analyses of mechanism design for implementing social choice rules, when individuals have diverse information and incentives.” 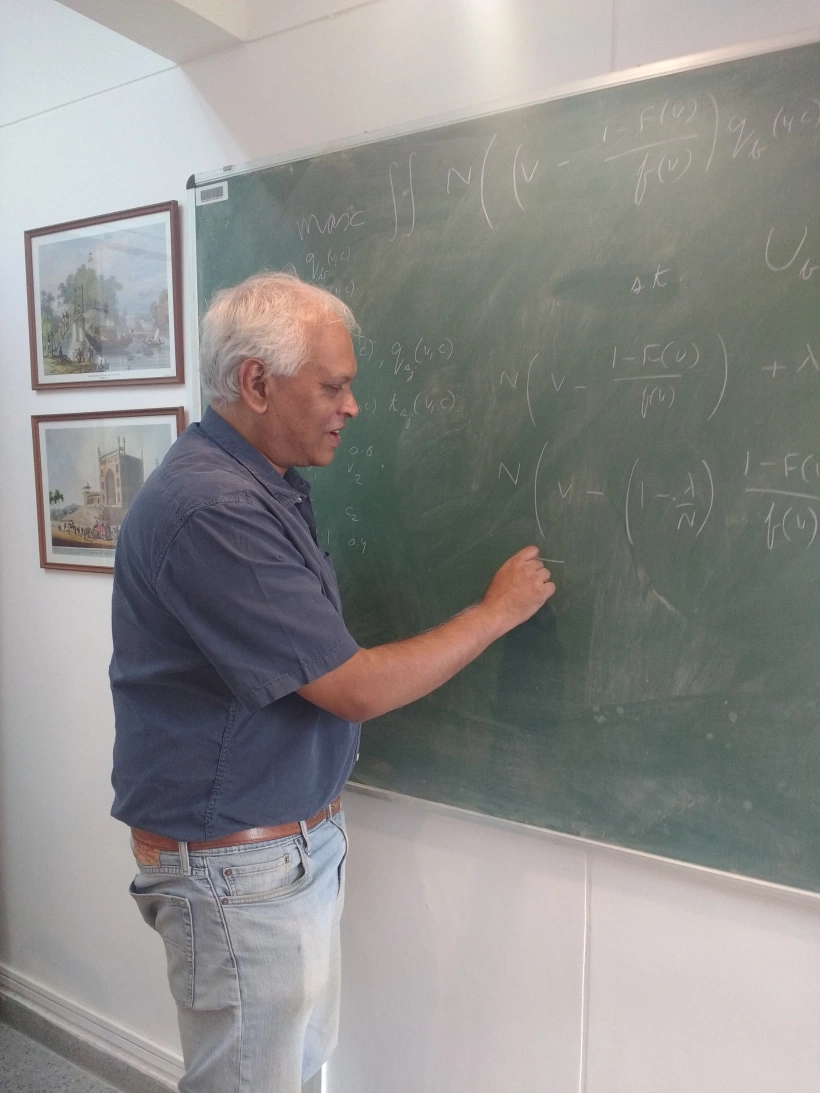 What are your primary research interests? What drew you to those areas?

I work on an aspect of game theory called mechanism design theory, which is about how certain social goals can be achieved when agents have different objectives and behave strategically. It is theoretical work and has overlap with other areas such as mathematics and computer science. When I left high school, which was many years ago, we didn’t have clear ideas of what to do. I knew that I didn’t want to do certain things – I didn’t want to be an engineer and I didn’t want a managerial job of any kind. Many of my friends from school were going to study economics in university. I had also heard that it was something interesting. So I decided to enroll in the undergraduate programme in economics in Delhi University. While studying there I realized I was attracted to “higher studies” and research. I became interested in economic theory and game theory in particular. I have been a researcher and teacher in this area for over 30 years.

What would you say is the hardest part of your job as a professor?

It is often said that the life of an academic is one of frustration, because one frequently feels inadequate. You try to do something and it doesn’t seem to work, but then you find somebody else from a completely different part of the world who has done exactly what you were trying to do and has done it much better than you. So, academia is a life where you have many disappointments and I think my experience is that most academics would go through periods of self-doubt and maybe even despair. At the same time, however, academia offers enormous compensations as well. There are very few, or in fact, I would say that there are no other areas of human endeavor or professions where you can do whatever you want to do and are paid money to do it. You don’t have a boss or a subordinate (just colleagues), and you also have the freedom to think and explore whatever it is that you want.

How would you explain the concept of mechanism design to a high-school student?

The basic problem is actually quite simple to explain. Let’s look at the standard voting problem. There are some voters and they have a ranking of the candidates. So I know that I prefer candidate A to B to C, and so on. So the question is, can you design a voting rule which will incentivize or induce you to be truthful? We know from common experience and evidence that people tend to be strategic than truthful. If we consider the selection of Olympics venues which follows a sequential elimination procedure, it is well-known that people try to eliminate their closest competitors in early rounds of voting in order to make sure that they can run. The question is, can you design something where voters are induced to vote truthfully? Whether you are truthful or not depends on how you think others will vote. The fundamental theory of strategic voting says that there is no good way to solve this problem. So the only way to really solve this problem is essentially to always go to a single person and choose his or her best candidate. Suppose I say – no matter what your preferences are, no matter how you vote – I will always go to X and choose whatever he says is best for him. So X will obviously not want to lie because he has the opportunity to get his best. As far as the others are concerned, they have no stake at all. What is far from trivial is that this is the only rule which works. Another aspect of this is auctions – say you have units of a commodity to sell and people have valuations which are known only to them. What’s the best way to design the auction? How do you auction coal mines? How do you sell the spectrum? How do you auction paintings? These are actually matters of public policy and ones of practical interest, which come under the domain of mechanism design theory.

What advice would you give to a high-school student who wishes to delve into economics?

Talking about academia in general – whether you’re interested in math or literature or history or Sanskrit – you should be engaged, intellectually ambitious, and curious. You shouldn’t be daunted by the degree of difficulty and what other people say. There’s an enormous amount of stuff that is out there. If you’re just interested in doing just about enough so that you can get a good job, then an academic career is not for you. You have to be insanely motivated to learn new things. It’s a matter of temperament and disposition. In the case of Sachin Tendulkar and Virat Kohli for instance, it is their motivation levels and their desire to excel is what singles them out. I mean it’s not a competition against other people so that you have to get more marks than them – you leave those things behind very quickly. It is about wanting to understand something better – a question about something in the world, a mathematical argument, some anomalous data, whatever. Curiosity and intellectual ambition are really the key ingredients for success as a scholar.. Additionally, for the fields I am associated with, it helps to like math, and to be reasonably proficient at it.

How would you describe your teaching style?

Roughly speaking, there are two different approaches to teaching – one is to cover a lot of ground, and the other one is to just concentrate on a few ideas. I definitely subscribe to the second approach. I’m very happy if I teach a few things and for students to understand and appreciate fully. Once they do, they’re equipped to follow up stuff on their own. There’s the other kind of teaching where you have to be alert where if you lose the thread for a minute or two, you’re left behind. I don’t subscribe to that school. I’m much more leisurely and I’m happy if people understand the main ideas and concepts. If they are interested, they can work out the details for themselves and press on further.

What is your success mantra?

I don’t believe I’m particularly successful. I think it’s not healthy to think of yourself as being a success story. If you achieve any success, typically luck plays a huge role. But you have to work hard, and you have to be very serious. But I also think that you should not doubt your ability. Most successful people are ones who are curious, organized, disciplined and motivated, and on top of that, they’ve been a little lucky! For instance, you work on something and that turns out to be very important. That’s a thing called ‘serendipity’ and it plays a large role in anyone’s success. Your colleagues, your peer group and your students play an important role in your success. You can study together and learn a lot by just feeding off each other. If your peers share the same interests as you then you learn an enormous amount from them. For students specifically, you learn from your teachers, but you learn an equal amount, if not more, from your classmates.

Do you think digital learning scores over rudimentary methods of classroom teaching?

I think it is definitely a good idea to expand into digital learning, especially now because of the fear of the virus. But I also think that a lot of learning requires guidance and mentorship. There is a lot of material out there. However if you look at the careers of great researchers they were usually inspired by some individual. You can learn routine things online like basic calculus. But if you’re interested in doing serious research, you can’t do it by doing online courses alone unless you are exceptionally talented. You need someone with whom you can discuss and develop ideas. This may even be true even for lower grades in school – I can’t imagine some seven-year-old learning the alphabet online! But certainly, for high school kids, it’s a good idea for them to look online to develop a taste and to see what they like and what they don’t.